06/23/2017 Update - Three weeks from launch and the U.S. ratings count has exceeded 300, far beyond what I've seen in the past for a single release. (Interestingly of those ratings, only 5 reviews have been posted. The majority of those are positive and elaborate, but an interesting ratio nonetheless.) In any case, I strongly recommend adding SKStoreReviewController support to your iOS app!

After a several month lapse - due to moving, getting married, a computer dying... excuses, excuses - I finally returned to development of Serial Reader with a minor update to the iOS app.

Along with some minor bug fixes and performance tweaks, the only major change was support for Apple's new official review prompt. The results have been dramatic.

Adding support for SKStoreReviewController was painless. Because Apple handles all of the logic on when and how often to show the user a prompt, all that's left for you as a developer is to determine where and when "it makes sense to ask the user for ratings and review within your app," as Apple states.

In my case, I decided to only prompt the user when he or she had used the app on at least 5 separate occasions (achieved by just adding a little counter in NSUserDefaults). 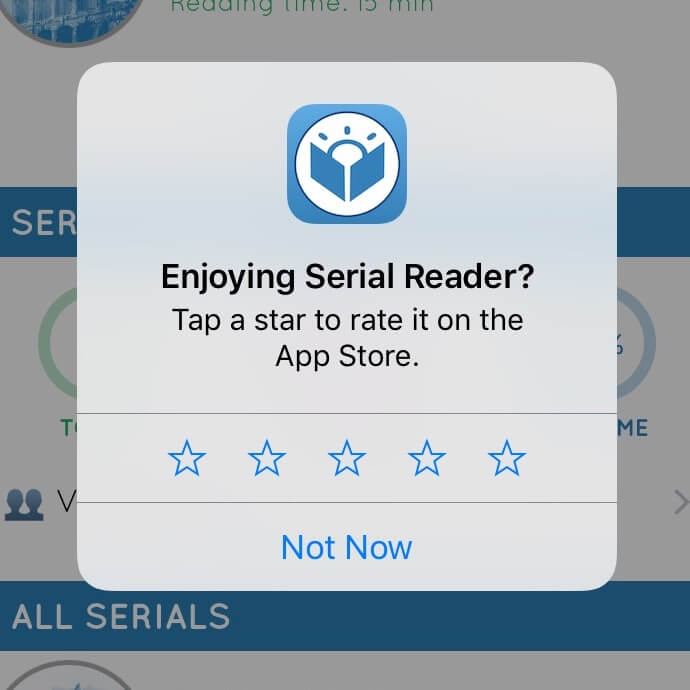 It will be interesting to see what happens with future releases. I don't know the specifics on how Apple is determining when to show these prompts to users. If it really only is a few times a year, this may be a first-time trend that's never again replicated.